My first review of the Vertere Acoustics MG-1 MkII turntable was published here in The Ear back on 8 October 2019. It was awarded a well-deserved 5 Stars by our esteemed editor and I subsequently nominated it as one of my products of the year. So why, a reasonable person might ask, do we need to review it again? The answer to that is straightforward, although it has the same model name and number as its predecessor, much has changed in the intervening period, enough to warrant a revisit in fact.

Changes are largely to the SG PTA arm which has a new tri-point bearing, new headshell, heavier decoupled counterweight and improved fine tuning of tracking weight among other upgrades. The motor drive has also been upgraded and as you will read there is an optional power supply that improves matter further. 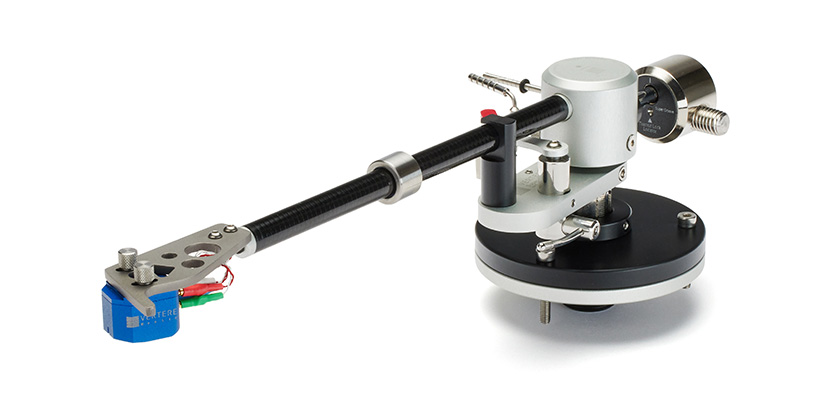 The review turntable was finished in the same clear cast acrylic as before, but this time with silver feet rather than orange. It fitted well on to the top shelf of my Quadraspire XL rack but I would recommend that you make sure that you have sufficient space as it’s wider than average. Assembling the unit from the box was very straightforward, and Vertere thoughtfully include a pair of white cotton gloves to be worn when handling the player; the acrylic is something of a fingerprint magnet. The platter is a precision made one piece aluminium alloy design, which uses the same spindle and similar bearing to the more expensive SG-1 player. The review sample was shipped with Vertere’s own Techno mat, which was fitted over the spindle and used throughout the review period. The bearing is housed within a phosphor bronze tube, and lubricated with Vertere’s proprietary formulated L-1G oil for added longevity. A bottle of the oil was included in the accessories shipped with the player. The SG PTA arm was already fitted with the Mystic MC cartridge, so my sole task was to slide the counterweight into place and adjust it, to achieve the recommended tracking weight of 2 grammes.

The belt was then slipped over the platter and the drive spindle. I had placed the Tempo motor drive on the shelf below and connected it using the supplied umbilical cord. Power came from the small optional Challenger power supply plugged into the Tempo with a tethered cord. One of my few criticisms of the machine I reviewed last time was that the motor housing was not as elegant as the player it served. The Tempo addresses that and is housed in a sleek case with a single central button to select either 33.3 or 45 rpm speeds, indicated by either a red or green LED. Inside the Tempo there is lot going on: “Its internal circuit as with the reference motor drive is uniquely microprocessor based providing a pure sine wave in the digital domain and then converted to analogue via an on-board DAC. Two waveforms are derived, a cosine and a sine, which are then amplified using two bridged amplifiers to power the motor”, according to Vertere. The result is that the platter spins with total stability, and it gets up to speed very quickly.

The last part of the set up was to connect the Redline phono cables and the earthing wire to my Gold Note PH10 phono stage and to set the latter for the recommended loading for the Mystic MC cartridge. The latter is new since my original review. The cobalt blue cartridge body is machined from solid aluminium alloy and attaches to the tonearm using a pair of stainless steel thumb screws. For perfect alignment on a Vertere tonearm there is an alignment ridge at the top front of the housing. The generator within utilises a samarium-cobalt magnet with a cross coil made of pure copper wires. The aluminium tube cantilever supports a micro elliptical bonded diamond stylus tip that is designed for maximum tractability without compromising high frequency response or increased surface noise. Its frequency response is quoted as a very wide 10Hz to 40kHz and power output is a healthy 0.5mV.

In my original review I had regretted that there was no dust cover available for the MG1. That has also now been rectified, with the purchaser now having the choice of either a full acrylic cover which fits RG-1, SG-1 and MG-1 players or a specific MG-1 MkII cover that sits atop the unit but is open at the front and back. These are optional additions at added cost, but one of them is really a necessity in my view. Both covers are embossed with the Vertere logo. The review system, as well as the previously mentioned Gold Note, consisted of my Lyngdorf TDAI 3400 integrated amplifier and a pair of Ophidian Mambo2 floorstanding loudspeakers, also in for review.

Listening to the MG-1 MkII
Regular readers will know that I have a selection of albums that I tend to play as part of any review, and indeed Love, Bob Dylan, Pink Floyd, Mark Knopfler and the other usual suspects all took their turn on the MG-1, which did the music full justice. However, I was also inspired to dig into few new vinyl acquisitions.

In late February, towards the end of the MG-1’s sojourn here, news came through of the death of Mark Lanegan, at the cruelly young age of 57. I had purchased his 2020 double album Straight Songs Of Sorrow on Heavenly when it was released, and felt compelled to play all four sides on the day I read of his passing. His vulnerable baritone voice was projected beautifully into the room and this was one of the most emotional listening experiences I can remember. If you are unfamiliar with this artist’s work, I can only suggest that you seek it out. The world is the poorer for losing him.

Another album which graced the MG-1 was Joanne Shaw Taylor’s The Blues Album, released in 2021 by KTBA. Produced by Joe Bonamassa and Josh Smith, this is a first rate modern blues recording. The Mystic dug out all the detail and yet never at the expense of musical flow, with a great deal of foot-tapping and even, dare I admit it, some tasty air guitar licks too.

2021 also saw the release of another Beach Boys retrospective, this one called Feel Flows which has remastered versions of two of the band’s finest late period albums, Sunflower and Surf’s Up. The latter has been a favourite of mine since I bought my original copy at a small subterranean record shop in Earl’s Court when it came out in 1971, and which is still in my collection. The second side has five wonderful but wildly different tracks, starting with Feel Flows and ending with the majestic Surf’s Up. Through the MG-1 the music sounded as fresh as it did 51 years ago with soaring harmonies and Brian Wilson’s fragile solo voice being projected with uncanny realism into listening room. Epic stuff.

Jazz too came through terrifically well. A regular on my turntable these days is Paul Chambers’ Bass On Top, reissued on the Blue Note Tone Poet series in 2020. The original recording was made by Rudy Van Gelder on 14 July 1957. Nearly 65 years later I felt as if I was sitting in the studio while the quartet of fabulously gifted musicians laid down the six tracks. The leader’s double bass, whether bowed or plucked, sounded astonishingly lifelike, and his three bandmates were also brilliantly presented by the MG-1/Mystic pairing.

I should also mention that in my original review another of my minor gripes had been about the arm-lift mechanism on the SG-1 tonearm. I am very happy to report that this time around it felt much better, whether my technique has improved or there has been some subtle tweaking I am honestly not sure, but either way with the 2022 version I found operating the SG-1 to be a pleasure.

Conclusion
I want to compliment Touraj Moghaddam once again. The founder, chief engineer and designer of Vertere Acoustics has never been one to rest on his laurels and announce mission accomplished. He is a restless soul, always seeking ways to deliver even greater musical joy to his clientele. I happen to know that in addition to his technical expertise he is not only a genuine music lover with a fabled record collection, but also plays the drums. I don’t know about you, but I want a guy like that building the sort of hi-fi to which one aspires. The rhythmic power of the MG-1 is one of its many strengths.

This latest MG-1 is definitely a step forward from the one I reviewed back in 2019. Of course a major change is in the Mystic which has entered a market with no shortage of excellent choices for the discerning buyer, however, it makes a compelling case for itself and I would expect it to be the default choice of anyone purchasing the MG-1 or even the higher end SG-1. The other change is the Tempo motor drive which is a step up from the original SG motor drive. All the other smaller tweaks have played their part in substantially improving an already highly competent record player. If I was buying an MG-1, I would also specify the Challenger power supply, and of course one of the dust covers.

The MG in the product’s title stands for Magic Groove, which given this record player’s astonishingly assured performance is not hyperbolic. Whether I played a record produced in the 1960s or the 2020s, it never failed to find the magic in the groove. Although we are only in the third month of the year it is hard to envisage that this extraordinary music-making machine will not be on the shortlist for my Products Of The Year submission come December. Vertere Acoustics is going from strength to strength.